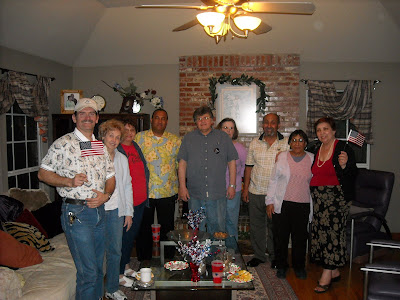 We had a very interesting gathering in my home for the Tax Day Tea Party on April 15, 2009. Even though the party was planned on short notice we had a good turnout. Many of these people I had never met before. It was an honor to meet these members of my community.
At the party people were able to sit and discuss issues that were important to them in a comfortable atmosphere. We gathered together to watch the Speaker of the House, Newt Gingrich, give a speech from New York. It was inspiring to watch.
Through FOX News Channel we were able to see all the many people that showed up around the country to show their support for America. It was an exciting time to be an American.
Thank you to everyone who attended!
Get ready for the Fourth of July Tea Party Rally I will be organizing here in Tulsa. And let’s keep this American Spirit going!
Posted by True Stories of Iran No comments: